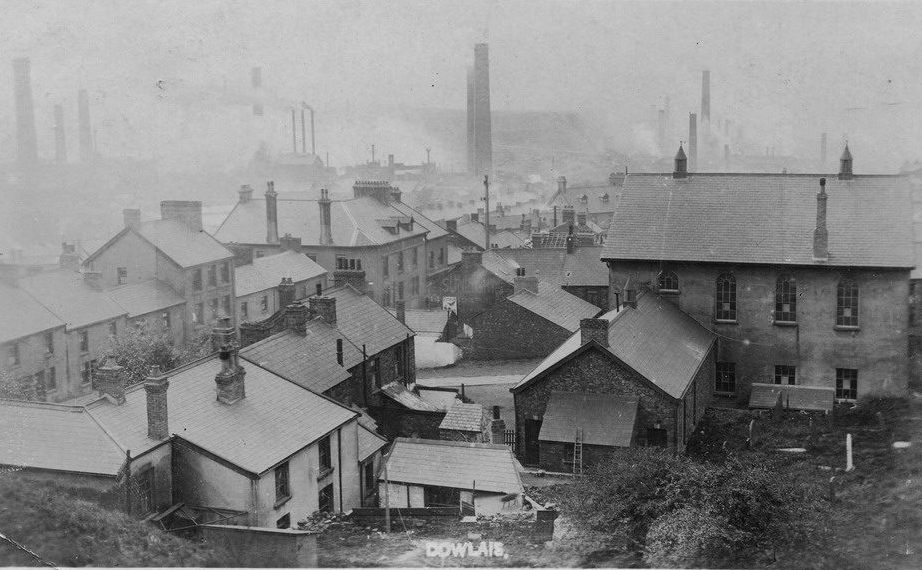 Caersalem Chapel, the only Welsh Baptist church in Dowlais, was bursting at the seams by the 1840s, as the population of Merthyr Tydfil swelled thanks to the availability of employment in the booming industries. Dowlais Ironworks was at the time the largest in the world, and one of four in the town, contributing to Merthyr then being the largest town in Wales.

W.R. Davies – the minister of Caersalem since 1838 – had the idea of establishing branch chapels around the borough. Between 1841-2, Hebron was built at Dowlais Top, at a cost of £1300. Caersalem paid £500 of this and released 106 members to Hebron. The opening services were held on 23rd and 24th July 1843. Caersalem remained responsible for Hebron until May 1846 when Hebron became independent.

An outbreak of cholera in 1849 spread quickly due to large numbers of people continuing to move into the area and living in unsanitary conditions. Death occurred quickly and on a large scale, leading many to seek refuge in the churches in what is known as the Cholera Revival. The minister of Hebron had baptised 179 people by September 1849. W.R. Davies of Caersalem himself died of cholera in 1849 after baptising 150 people on the previous two Sundays.

Within ten years of Hebron’s construction, cracks began to appear in the building due to mine workings undermining the foundations. Some blamed the frequent baptisms and weight of spectators in the galleries, while others attributed it to the loud preaching of Hugh Cefni Parry who became minister in 1851! The building was demolished but the stone and wood was reused in rebuilding the chapel to the same general design. The new building was completed in 1856 at a cost of £750.

Another revival occurred in 1859. During this revival John Jones, a Dowlais native, was converted at Hebron. Ten years later his son Rhys Bevan – more commonly known as R.B. Jones – was born. He would become a leading figure in the 1904 revival.

During the early decades Hebron had a succession of ministers who served for a few years each. Many pursued other other interests such as literature and poetry. Gruffudd John Williams, who served for nine years, gave vivid lectures on mining methods and is reputed to have caused a small explosion during a demonstration in the pulpit!

By 1890 membership was relatively low for the time, at about 200, when W. Ceinfryn Thomas became the minister. The church prospered under Thomas’ ministry. By March 1891, 33 people had been baptised, and 60 more were added during the rest of the year. The membership increased to 324 by the end of the century and the chapel was full every Sunday with about 800 people. There were no less than 35 Sunday school teachers and 270 students. The membership returned to similar levels after the extraordinary but short-lived heights of the 1904 revival (see below).

During World War I many young men from the church were called up but only one lost his life. Immediately after the war the great issue was the desire for a pipe organ and an upstairs gallery all the way around the building in order to hold a Gymanfa Ganu (Welsh hymn singing festival) to rival Bethania Chapel! The organ chamber was added to the building in 1920 but it was another 30 years before the organ was installed.

Thomas was a towering figure in the community. Boys were named after him and he sat on the governing body of the University of Wales. During the general strike in the 1920s he refused to take his salary. If there is any criticism of this period it is that “pulpit Welsh” was very different to the Welsh spoken in conversation and people expected not to be able to understand what the preacher was saying. Thomas died in October 1929 at the age of 76.

In July 1904 the Glamorgan Baptist Association meeting was to be held at Hebron. Prayer meetings were called the previous week as people were longing for something more than they had and believed God was going to move in the community. Another week of prayer meetings in August led up to the annual preaching festival of the church and continued afterwards. Many backsliders were restored and hearers of all age converted. Edward Cefni Jones wrote in his diary, “A great revival – many came to the fellowship” after preaching on 5th September 1904. This was nearly two months before Evan Roberts’ famous prayer meeting at Loughor, one of the oft-quoted “starting points” of the revival. A meeting of young people at 6pm on a Saturday in October lasted until 1am!

The revival leader Evan Roberts himself visited Dowlais in January 1905 and held a meeting at Hebron on the 24th of that month in the evening. With the gas lamps and the crowds the heat was intolerable and so some of the windows were broken. The Western Mail’s revival reporter Awstin was present and said the Western Mail would cover the cost of the windows!

200 people were added to Hebron during the revival, taking the membership up to around 600. A man in the pub across the road felt compelled to put down his pint and come into the prayer meeting. He heard his daughter praying for him and was converted.

Unpublished personal memories of 1904 in Dowlais

T. E. Lewis and I were brought up together on Dowlais Top, and only a few Years ago, (not long before he died) while we were standing outside Woolworths Stores in High Street, Merthyr, he related to me how and where he was saved.

Every Saturday night he and his friends spent their time drinking in different pubs until eleven-o-clock Stop Tap; after this they used to take drinks with them to one or another of his friend’s homes, and drinking until the early hours of Sunday morning. He told me he never went home until about two-o-clock in the morning. He was going home drunk one Sunday morning alone along Gwernllwyn Road, with a railway along one side of it. This was a lonely road. He told me he was brought down under an awful conviction by God of his sinfulness and guilt; and there alone on the solitary pavement he cried to God for mercy and forgiveness for some time. T. E. Lewis was saved there and went home a changed and sober young man and became a faithful member of Hebron Baptist Chapel for more than fifty years. He said that the Lord Jesus Christ took that appetite and thirst for drink out of him that night for ever, for it never returned. Praise the Lord. T. E. Lewis was well known as a Coster in Twynrodyn and Merthyr.

Sam Brown, another friend of mine, was converted down in the Colliery – Number two Pit Bedlinog – there alone between two ventilator doors. Praise God!

I had an adopted brother, married and living in Dowlais Top, his hobbies were drinking, gambling and fighting. Many of those he knew, who had lived the same kind of life, were at this time converted and he used to go with them to the meetings in Hebron ; but he came out time after time saying “They are not going to have me.” But the more he was coming and going out defiantly, the more an even greater volume of prayer would rise from the congregation to the Throne of God in Heaven that the Lord would have mercy on him and bring him to His Feet. Not long afterwards some of the members of Hebron were coming home at midnight one Saturday night after attending a Revival meeting at Pantywain, a village on the mountains above Dowlais Top. Before they came to the houses in Dowlais Top they could hear somebody moaning and groaning on the side of the road, and Glory to God it was him; brought down under awful conviction and crying to God for mercy.

Two of the men picked him up, one under each arm, and took him down past his house to the meeting in Hebron where the meetings were going on all night. There, that night, or rather Sunday morning, D. R. Williams, commonly called “Dai Ruth” was converted. Oh, what a change! He became a member of Hebron Baptist Chapel.

– Extracts from the Testimony of Price Davies, 1881-1966 (with thanks to his grandson, Roy Davies, St Luke’s Campus Librarian, University of Exeter)

In the late 1940s there was pressure to introduce English into the services on a limited scale. When E. Dulais Jones was inducted as minister in 1951 he was instructed to use his discretion on the use of English. There were by this time members in the congregation who spoke only English and the evening sermons gradually came to be preached in English.

The 1960s was a decade of great change in society and also within churches and denominations. Hebron remained firmly evangelical and withdrew from the English and Welsh Baptist Unions in the early 1970s. Also at the beginning of 1970, a sudden exodus meant the membership dropped from 180 to 70.Welsh was no longer the everyday language of Dowlais Top, even in homes where people knew Welsh and so the language used at Hebron changed exclusively to English at this time.

By the mid-1980s the membership had dwindled to around 40. With services held mainly in the vestry, consideration was give to demolishing the chapel or converting it into accommodation for the elderly. However, an offer came from the Manpower Services Commission to completely refurbish the building, covering all the labour costs.

The church met at Gwernllwyn School during the renovation from Easter 1986 onwards. In June of that year a young family appeared in the congregation and others followed. By the time the congregation returned to the building in February 1987 the membership had almost trebled and the chapel was very much needed again.

2021 marks the 175th anniversary of Hebron becoming independent. Our 175th anniversary booklet contains a fuller history covering all of the ministers. You can read it here or use the download link to save a copy: